This year’s Hedenius Prize is awarded to Shamima Aktar for her work for women’s rights and integration, as well as as representative of secular bloggers and activists forced to fly to Sweden from Bangladesh.

Shamima Aktar (Shamima Mitu) is awarded the 2017 Hedenius Prize for her work for women’s rights in Bangladesh and Sweden. She is also awarded the prize as representative of other secular bloggers who have moved from Bangladesh to Sweden in recent years.

Welcome to the ceremony where Shamima Aktar receives the prize. In addition, David Lagercrantz , author and board member of Svenska PEN, speaks. 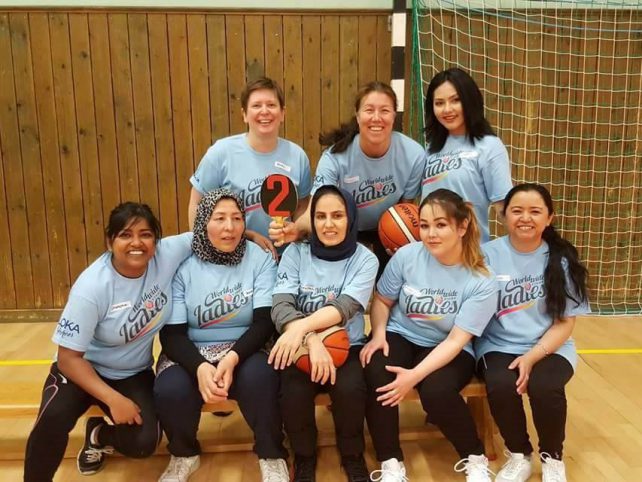 World wide ladies” with Shamima Aktar in the far left

Shamima Aktar is a journalist and blogger from Bangladesh who fled to Sweden in 2015. In Bangladesh, she wrote for a larger newspaper and women’s blog, Women’s Chapter , as well as on other blogs. Aktar’s texts are about women’s rights in opposition to religious fundamentalism. She has also propagated for gay rights and child marriages and sexual harassment of women in public places.

Shamim’s journalism, blog texts and opinion-forming activities were faced with death threats and threats of rape from Islamist extremists. In the end, she felt obliged to leave Bangladesh.

In Sweden, Aktar in the project “World wide ladies” has been involved in opening sports training for women, especially girls and women who are new in the country. This has often been an initial integration step for women from deep patriarchal societies.

“It’s a happy news that the Humanists decided to administer Shamima Mitu as secular bloggers, freelance and activist.
“As long as I knew her, she has been a true fighter. She is a gender-conscious and well-known women’s rights activist and she has been writing for many years. I am very pleased that Shamima Mitu, a writer in Women’s Chapter, has been appointed the winner of this year. I wish her all the best in life, says Supriti Dhar, editor, Women’s Chapter.

In recent years, more than ten Bangladeshi secularists and human rights activists have been forced to leave their home country and seek refuge in Sweden. They work for humanity, religious freedom, science and for women and minority rights. They have all been attacked or received grave threats from Islamist extremists who are prepared to kill in order to prevent peaceful activism and silence the free word.

Shamima Aktar is a good representative of this group and also receives the Hedenius Prize on all their behalf.

The Hedenius Prize is awarded each year by “The Swedish Humanist Association” to a person or organization who works in the philosopher Ingemar Hedenius Spirit.

The motivation of the humanists:

“In recent years, several humanists from Bangladesh have moved to Sweden, from violence and threats from Islamist extremists. These people are activists for scientific thinking, freedom of expression, human rights; especially women’s, minorities and secular freedom; In short, they have fought for secular humanism.

Shamima Aktar has acted wisely for women’s and other’s rights, as a writer and activist in Bangladesh. She has been with this since she has come to Sweden, including by activating newly arrived women in baskets training. In this way, women have been helped in a healthy and joyful way to begin their integration.

For his struggle for women’s rights, integration work and as representative of secular bloggers who sought refuge in Sweden, Shamima Aktar is awarded the 2017 Hedenius Prize. ”